On A mission To Save The Earth

On A mission To Save The Earth 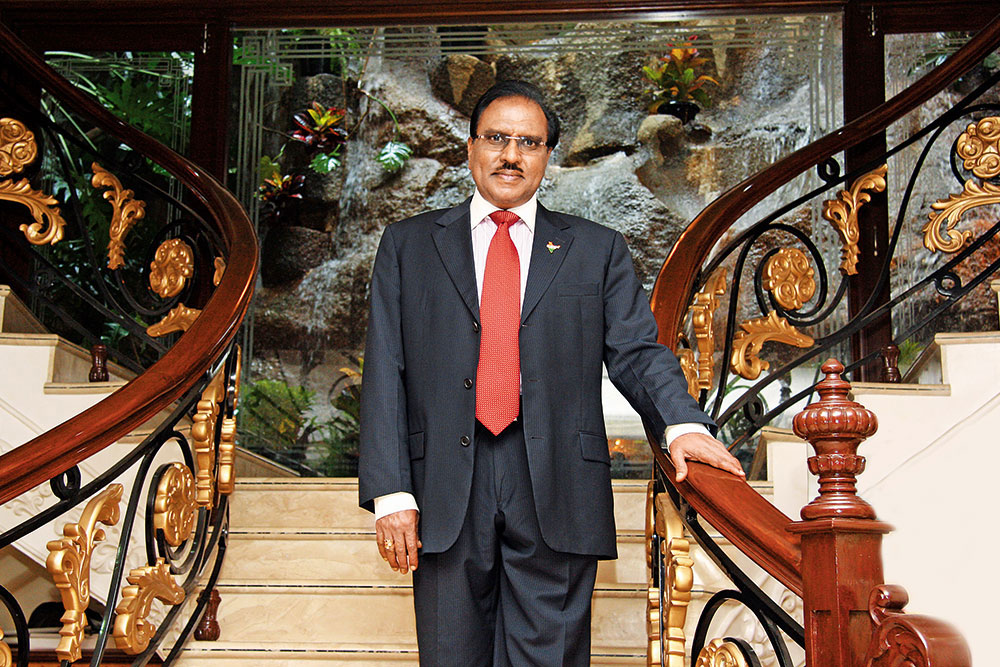 India has espoused the precious secret to health for thousands of years and healing, for not only people of this land but also all humanity globally.

Pragati Group’s trailblazing legacy of two decades can be traced to its profound reverence for safeguarding the purity of the Pancha Bhootas, the five elements of Indian ethos — Air, Water, Fire, Earth and Sky. Significantly, the nucleus of the organization was born in 1994, consumed by a passion for ensuring that India’s medical heritage must take its rightful place as one of the world’s greatest healing systems.

The deep-rooted belief for upholding the principles of ‘Vruksho Rakshati Rakshitaha’ and ‘Gow Samrakshana,’ viz., the significance of the cattle and the ecology as depicted in all the images of Lord Sri Krishna, which is the basis of leading a holistic life, full of contentment and prosperity.

Born in an agricultural family in Repalle of Andhra Pradesh, Dr. Gaddipati Bala Koteswara Rao had a goal: healing gardens to eradicate hunger and pollution.

Dr. Rao’s childhood days in paddy fields, streams, rivers and nature left a deep and memorable experience of nature’s beauty, purity and bliss. A good student, he got a Bachelor of Engineering (Mechanical) degree from Osmania University.

According to Dr. Gaddipati Bala Koteswara Rao, founder of Pragati Group, “India has the youngest population, which they are an asset to the country. India, with the youngest youth population in the world at 34.8 per cent (2011 census), has much youthful energy to offer, especially in the agriculture sector.”

He carried his passion to his entrepreneurial venture. A farmer cultivates and produces food grains. He serves society by meeting its food requirements. Dr Rao believes that change culture is not only on the intake of food products, but on the regularly consumed products ranging from plastic to cloth and jute bags, natural-based products of utensils for cooking and wood products at home rather than chemical-based products.

Unfortunately, youth participation in agriculture is declining, even though agriculture continues to be the primary occupation of more than half the Indian population. Developing skilled agriculture is the environment which protects Biodiversity. “Agriculture is the only field where the young people can be an asset and become entrepreneurs and create more jobs,” says Dr.GBK Rao. It is his motto that is reflected in every operation of Pragati Group.

He points out that a farmer’s hand is always giving, and all others are in receiving position. “I have seen the reversal of farmer’s fate who once distributed Amrutha Ahaaram – a three days package if the young generation can follow, it is very good for their health, which is the need of the hour.

Emphasize remains on the importance of food habits in four key areas, namely:

From Coffee/Tea to Herbal Tea

Pragati has planned a mega event on Aug 14th 2022 at Shilparamam, Hyderabad in advance of the occasion of the United Nations declared 2023 as an International Year of Millets

Dr. Gaddipati Bala Koteswara Rao, Founder Chairman of Pragati Group, says, “My objective is two-fold: to restore the recognized, noble and superior position of the farmer in India and create a healthy and happy individual through Amrutha Ahaaram.”

To save the planet, agriculture is the only avenue where wasteland can be transformed into agriculture, horticulture and forestry, which is the need of the hour, he says. Dr Rao has a conviction that the younger generation must be given training in agriculture. With this belief, he started Pragati Sudhaama, which moulds them within no time. “With Pragati Sudhaama, we can change the whole world, and India will become No.1 if we take care of this young population,” says Dr. Rao.

Pragati was envisaged and set up in 1994 with healing gardens to eradicate hunger and pollution and to Create “Vyadi Rahita Samajam”. Pragati Sudhaama, since 1994 has been a robust platform where several people get trained. Pragati, jointly with the University of Hyderabad, India, is planning to start One Year Diploma in Sustainable Development, Green Technology and Policy Initiatives (DSDGT&PI) in January 2023.

He points out that the world is looking for a country like India’s young people to get skills training, develop, and make the world beautiful and healthful. Dr Rao believes that the country’s young population must be trained today to get jobs after education. “They do not have skills. We have not given work culture to the outcoming Graduates, Post Graduates. They are all white collars. There is no skill development in them, so they become a burden, rather an asset to the country,” says Dr. Rao.

But in Pragati Sudhaama, where the young generation must be trained, this is the only platform to create skill development.

The Pragati Biodiversity Knowledge Park brings to light the Bharatiya Rishi Samskriti and Vedic living practices, recognizing India’s inordinate contribution to the world. It is a wonderful green belt with 2500 acres of land. This land was utilized to grow 4.5 million herbal medicinal aromatic mother plants according to rich Bharatiya Rishi Sanskrit (culture) and Vedic living. Pragati also protects the sacred cows, and that played a catalyst in thwarting threats of hunger and pollution by transforming the area into natural farming.

Last year, Pragati received a Certificate and a Momento from the World Book of Records, London, for identifying sacred, herbal, medicinal mother plants, preserving more than 650 varieties of medicinal flora, and raising 40,00,000 plants in Pragati Sudhaama.

Along with this set-up, Pragati offered yoga, meditation, naturopathy and a spa as part of its expansion. In addition, they were propping up the area with gardening, landscaping, and a mosquito-free environment.

As a result of these efforts, Pragati is recognized as a Tourism destination for the promotion of herbal, health, food, bio and eco-tourism, all under one roof.

Pragati’s 3-Ps of Sustainability are Planet, People and Profits. The Mission of Pragati is to Save Trees, Save Cows, Save Soil and Saving Mother Earth and don’t bargain on farmers’ products. Pragati is an icon for Bharatiya Sanskrit (culture) and Sampradayalu (traditions).

The above changes are necessary in the school education to bring about a radical consumption change. Dr Rao advocates for a mass media campaign to achieve this goal. Dr Rao urges people to switch from the popular soft drinks nature-based drinks to save environment.

We are duty-bound to create a chemical-free and plastic-free society. Mere words will change things: consumption pattern can only drive the desired change.

Pragati and team the Group continue to surge ahead to serve humanity, upholding the motto of ‘live and let live.’ Pragati has set the trend, but more needs to be done through combined initiatives and the support of governments, leaders, NGOs and citizens of India.

Global Environmental Catastrophe:  BIODIVERSITY is the only Solution

MILLETS & HERBAL DECOCTIONS: THE FOOD OF THE FUTURE